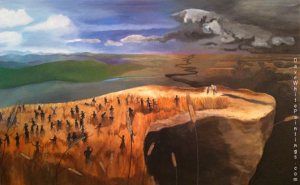 My original plan was to make today’s memo the sequel to last week’s memo about media buying, but I decided not to go to the trouble.

You see, I’m convinced no one believes me.

I wrote last week’s memo to warn you of the extraordinary dangers of using Gross Rating Points as a guide to media placement.

“But Roy, that’s how everyone does it.”

“But that’s how everyone does it.”

“Yes, I know. And that’s why so many businesspeople in America say, ‘I tried radio and it didn’t work.'”

“But that’s how everyone does it. Gross Rating Points are the industry standard.”

You see why I decided to drop the whole thing, don’t you?

I know you’re secretly relieved I’m not going to talk about media negotiation/buying/placement again. Most of you have your own beliefs about what would work and why it would work.

Many years ago in a college classroom a person standing at the front of that room pronounced Gross Rating Points to be orthodox. That person had been given those beliefs to cherish and protect and pass along to the next generation when he or she was in college many years earlier.

Orthodoxy is a powerful thing.

And that, you see, is why “everyone does it.”

Me? I’m just a goober who has spent a few hundred million dollars purchasing tens of thousands of radio schedules nationwide over the past 30 years and then watched to see what did and didn’t happen as the result of each and every schedule.

I paid attention. I even wrote a few New York Times bestselling books on the subject. But now I am boasting. I’m sorry.

Among the 50 thousand or so readers of the Monday Morning Memo, there may be two dozen of you who would like to hear me explain exactly what the problem is with a schedule negotiated according to Gross Rating Points and evaluated on a cost-per-point basis. So I’ve built a web page that summarizes the problem and explains how to avoid it. The two dozen of you that are interested can follow this link. The rest of us are going to talk about something different.

Bob Wakitsch is a cognoscenti graduate of Wizard Academy from the early years. He runs a dental lab. He was recently asked to write a feature story for the primary trade publication of his profession. (Did you know there are more than 140,000 dentists in America?)

Bob chose to write about society’s pendulum and how it will likely affect trends in dentistry, which he is qualified to do since he dutifully absorbed the entire 2-day Pendulum class we hosted last fall. (We’re having another Pendulum class April 17 and rooms in Engelbrecht house are still available.)

Observation #1: I remember during your Pendulum presentation, you said something like, “Heroes in a ‘We,’ who are good, are either dead or fictional.”  The other day, while perusing in a bookstore, I noticed the titles in the bestseller sections.  In non-fiction, there was Killing Lincoln,  Steve Jobs, and Being George Washington. In fiction, there was 11/22/63, and Abraham Lincoln: Vampire Killer.

When I got home, I checked the bestseller lists from 1982 and 83, the zenith of the ‘Me.’  Obviously, it was loaded with ‘Me’ titles.  Jane Fonda’s Workout Book, Living, Loving and Learning (Buscaglia), Life Extension (Pearson and Shaw), In Search of Excellence (Peters and Waterman), Megatrends (Naisbet), Motherhood (Bombeck), The One Minute Manager (Blanchard and Johnson), Mary Kay’s Guide to Beauty and Creating Wealth (Allen).

Observation #2: The publisher of the trade journal in which my article about Pendulum will appear recently wrote that she was abhorred by the moral fiber of today’s society. She feels it seems to be split between those who are (1.) working together for the common good, and (2.) those who are greedy and trying to take advantage.  She even referenced Gordon Gecko (a prime example of a ‘Me’).  Finally, she said she wished Malcolm Gladwell would research all this and write a book so we could all understand it.  I wrote to her and told her she didn’t need to wait for a book from Gladwell because the DEFINITIVE work had already been written by Roy H. Williams and Michael Drew and would be out in April.  She is going to try and arrange her schedule so she can be in Austin in April for your next Pendulum workshop.  I hope so.

It’s funny – just like with third gravitating bodies, once you know about ‘Me’ and ‘We,’ you see it everywhere.

Right now you’re probably thinking I included Bob’s email in today’s Memo because I’m trying to build anticipation for the release of the Pendulum book. That assumption seems reasonable, I’ll agree, but the truth is that I was feeling blue because so very few people will heed my warning about Gross Rating Points. I printed Bob’s email because it made me feel better when I opened it Friday morning. Yes, I am that small and vain and insecure.

Did you ever read The Catcher in the Rye? The title of that book refers to the recurring dream of Holden Caulfield, in which he is standing in a field of rye near the edge of a tall cliff. Children are playing in the field, unaware that death waits nearby.

“Anyway, I keep picturing all these little kids playing some game in this big field of rye and all. Thousands of little kids, and nobody’s around – nobody big, I mean – except me. And I’m standing on the edge of some crazy cliff. What I have to do, I have to catch everybody if they start to go over the cliff – I mean if they’re running and they don’t look where they’re going I have to come out from somewhere and catch them. That’s all I do all day. I’d just be the catcher in the rye and all. I know it’s crazy, but that’s the only thing I’d really like to be.”

– Holden Caulfield in Chapter 22 of The Catcher in the Rye

Today is the last time I’m ever going to talk about media scheduling in the Monday Morning Memo. I hope you’ll understand and forgive me when I refuse to look toward the edge of that cliff or comment on the broken bodies below.

So when a businessperson cries, “Why? Why? Why didn’t it work?” and they want someone to explain it all to them, I’m just going to shrug my shoulders and suggest they call their college marketing professor or the salesperson who scheduled their ads or the media buyer who negotiated that schedule using a Gross Ratings Point target and a cost-per-point budget as the basis for their decision making.

I promise to make next week’s memo more fun.

PS – After working with the late Woody Justice for a delightful 25 years,
Roy H. Williams Marketing regretfully resigned that account shortly after Christmas. I share this with you only so you’ll know that we are no longer associated with Justice Jewelers in Springfield, Missouri.
We do, however, wish them the best.