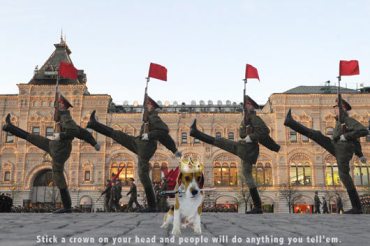 “Normalization” begins with an idealized norm of conduct – for example, the way a soldier should ideally stand, march, and present arms, with each of these actions defined in minute detail. Individuals are then rewarded for conforming to this ideal or punished for deviating from it.

Normalization allows a leader to exert maximum social control with the minimum expenditure of force. This idea of “disciplinary power” emerged over the course of the 19th century, came to be used extensively in military barracks, schools, factories and offices in the 20th century, and has since became a crucial aspect of modern societies.

I blame the British.

“We all know bad things are happening to our political and social universe; we know that business is colonizing ever larger chunks of American culture; and we know that advertising tells lies. We are all sick to death of the consumer culture. We all want to resist conformity. We all want to be our own dog.”
– Thomas Frank, Conglomerates and the Media, 1997

“The reward for conformity is that everyone likes you but yourself.”
– Rita Mae Brown, Venus Envy, 1994

“Education either functions (1.) as an instrument which is used to facilitate integration of the younger generation into the logic of the present system and bring about conformity or (2.) it becomes the practice of freedom, the means by which men and women deal critically and creatively with reality and discover how to participate in the transformation of their world.”
– Paulo Freire, Pedagogy of the Oppressed, 1968

Paolo Freire was a miraculous educator who used unapproved methods to teach thousands of illiterate Brazilian farmworkers to read and write in just 45 days. He was later put in jail.

I believe Paolo would have loved Wizard Academy, a school for the imaginative, the courageous and the ambitious. We resist rigid rules and rely instead on universal principles.

Laid side-by-side, a stick and a rope have a similar profile. Likewise, rules and principles look alike even though they have little in common.

Principles are like rope, able to be wrapped around even the most weirdly shaped problems. They are less brittle than rules, and stronger. Principles whisper priceless advice and people are happily led by them.

There. I have said it.