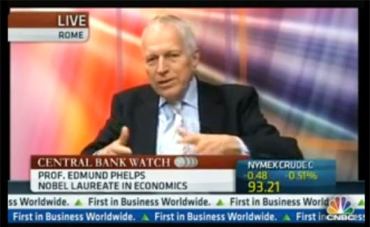 Headlines often tell the truth more powerfully than is completely accurate, a disturbing trend in this day of sound-bite news.

The mental image conjured in the mind by the headline, “Nobel Prize-Winning Economist Agrees With Wizard Academy,” is one in which the Nobel Laureate (1.) is aware of Wizard Academy and (2.) makes a statement of affirmation regarding it.

Neither of these things has happened. So how could the writer of that headline say such a thing? The Monday Morning Memo you received on July 29 was titled, Fortune’s 500 or America’s 5.91 Million? Perhaps you remember reading it.

In that memo I stated,

The Fortune 500 are the newsmakers but they are not the backbone of the American economy. According to the U.S. Census, America is home to nearly 17 million sole proprietorships, plus an additional 5.91 million businesses with fewer than 100 employees. These 5.91 million are the backbone of the economy since they create more new jobs than all the other companies combined. The press will cheer for the giant with a spear but I sing for the boy with a sling.

On August 17, 2013, more than 2 weeks after that MondayMorningMemo appeared, Jeffrey Eisenberg sent a story from the August 17th New York Times in which the Sterling Professor of Economics at Yale, Robert J. Shiller, contemplated the newly-published worries of Edmund Phelps, the 2006 recipient of the Nobel Prize in the Economic Sciences.

“Professor Phelps discerns a troubling trend… He is worried about corporatism, a political philosophy in which economic activity is controlled by large interest groups or the government. Once corporatism takes hold in a society, he says, people don’t adequately appreciate the contributions and the travails of individuals who create and innovate. An economy with a corporatist culture can copy and even outgrow others for a while, he says, but, in the end, it will always be left behind. Only an entrepreneurial culture can lead.”

I’m not suggesting that Phelps or Shiller was influenced by what I wrote. In fact, I’m reasonably certain they’ve never heard of me. But I do feel I’m well within the mark to say both men agree with me.

Phelps is worried about corporatism. Me? I’m worried about a disturbing trend toward overstated sound bites. I gave today’s memo a reckless headline to underscore my point, but better examples are all around us.

A recent story boasted the headline, “Right Brain, Left Brain? Scientists Debunk Popular Theory.” Google it and you’ll find dozens of variations of that story reposted by online parrots who never pause to contemplate what they hear before squawking it to all the world.

Invest 3 minutes to actually read that story and you’ll find the headline to be false and misleading to the point of absurdity. The discovery for which Dr. Roger Sperry won the 1981 Nobel Prize in Physiology stands as tall and proud as ever. Here’s a direct quote from the story that supposedly ‘debunks’ Dr. Sperry’s findings:

“‘It’s absolutely true that some brain functions occur in one or the other side of the brain,’ explained Jeff Anderson, M.D., Ph.D., lead author of the study. ‘Language tends to be on the left, attention more on the right. But people don’t tend to have a stronger left- or right-sided brain network. It seems to be determined more connection by connection.’”

Dig into that study by Dr. Anderson and you’ll find he merely summarizes what we’ve always known: both sides of the brain are in constant use. There is never a moment in which thoughts and the associative memories triggered by those thoughts are contained entirely on one side.

I believe this trend toward overstatement has its roots in the “corporatism” decried by Professors Schiller and Phelps. Listen to the most highly paid pundits on radio and television and you’ll hear sociopathic children who have learned to cry “wolf” louder and more frantically than their peers.

Corporatism rewards any spokesperson who can control the thinking of others.

A society that no longer has time for contemplation, scholarship, or independent research is at the mercy of little boys who have no conscience and who are desperate for attention.

Time and attention are commodities more precious than diamonds and gold. We have only so many moments. It is a heartless thing to trick a person into giving them to you.

False shouts of “Wolf!” should be cast into oblivion, along with those empty-headed parrots who reheat, repeat and retweet them.