What I Do Today Is Important 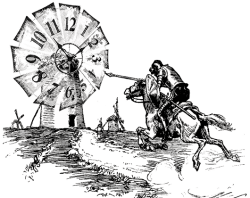 For I Am Exchanging a Day of My Life For It.

Quixote sees the turning of the windmill as the flailing arms of a giant that must be defeated.

Peter Pan will remain young only if he can escape a tick-tocking crocodile that has swallowed a clock.

In 1904, old Mrs. Snow spoke of her late husband to author J.M. Barrie on the opening night of his play, Peter Pan, “…and he would so have loved this evening. The pirates, and the Indians; he was really just a boy himself, you know, to the very end. I suppose it’s all the work of the ticking crocodile, isn’t it? Time is chasing after all of us. Isn’t that right?”

Don Quixote doesn’t defeat his giant but is lifted on its revolving arms and slammed into the ground. Yes, each of us is chased by the same crocodile that tormented Captain Hook and Peter Pan; tick-tick-tick-tick… Time is the windmill of Quixote.

Rita Mae Brown said, “I believe you are your work. Don’t trade the stuff of your life, time, for nothing more than dollars. That’s a rotten bargain.”

Again I ask, what are you buying with the hours of your life?

Anne Tyler opens her book, Back When We Were Grownups, with the words, “Once upon a time, there was a woman who discovered she had turned into the wrong person.”

That line scares me a little. Sometimes I worry that I’m turning into the wrong person, too. Don’t you?

You and I gasp for breath and wipe tears from our eyes, feet flying barefoot in our daily race against time.

“The North Americans’ sense of time is very special. They are short on patience. Everything must be quick, including food and sex, which the rest of the world treats ceremoniously. Gringos invented two terms that are untranslatable into most languages: ‘snack’ and ‘quickie,’ to refer to eating standing up and loving on the run … that, too, sometimes standing up. The most popular books are manuals: how to become a millionaire in ten easy lessons, how to lose fifteen pounds a week, how to recover from your divorce, and so on. People always go around looking for shortcuts and ways to escape anything they consider unpleasant: ugliness, old age, weight, illness, poverty, and failure in any of its aspects.”
– Isabel Allende, My Invented Country

Our race against time is a race we will lose. But running out of time is not what frightens me. This car will run out of gas. What frightens me is the idea of spending irreplaceable time in a headlong rush to an unworthy destination.

John Steinbeck speaks of the unworthy destination in Sea of Cortez,

“Most busy-ness is merely a nervous tic. We know a lady who is obsessed with the idea of ashes in an ashtray. She is not lazy. She spends a good half of her waking time making sure that no ashes remain in any ashtray, and to make sure of keeping busy she has many ashtrays.” p. 182, (1941)

We spend our time searching for security and hate it when we get it.

In chapter 5 of Ursula K. Le Guin’s The Left Hand of Darkness, a fortuneteller, Faxe, answers Genry’s question about time with a question of her own:

“What is sure, predictable, inevitable – the one certain thing you know concerning your future, and mine?”

“That we shall die.”

“Yes, there’s really only one question that can be answered, Genry, and we already know the answer… The only thing that makes life possible is permanent, intolerable uncertainty; not knowing what comes next.”

Make no mistake; the future has yet to be written. For we are a species gifted with choice.

The Greeks believed, “A civilization flourishes when people plant trees under which they will never sit.” Wes Jackson adds to this idea a glowing line of his own, “If your life’s work can be accomplished in your lifetime, you’re not thinking big enough.”

I confess; my hope as I write this note to you is that you would fling yourself into a purpose. Because if you and I leave this world better than we found it, we are indeed a civilization.

The training and encouragement of future citizens is the most ambitious life’s work of all.

Children are the living messages
a mother sends to a future she will not see.

In gratitude to every mother everywhere,
Happy Mother’s Day.