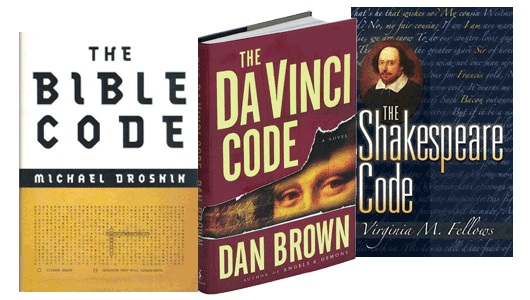 Finally, an authentic, encoded message.
And you’ll never guess where.

The Da Vinci Code was published in 2003, exactly 10 years ago. The book has been denounced as an attack on the Catholic church and sharply criticized for its historical and scientific inaccuracies, but that hasn’t keep it from selling more than 80 million copies in 44 languages. The story is fiction, marketed as fiction, and contains only a bare sprinkling of tautly-stretched connections to reality, but millions of wide-eyed gullibles accepted The Da Vinci Code as fact anyway.

In 2006, Virginia Fellows published The Shakespeare Code, purportedly proving that William Shakespeare was actually Sir Francis Bacon. This wasn’t the first book written, however, in an attempt to prove that Shakespeare wasn’t Shakespeare. More than 4,500 such books had been published prior to 1949 and “Nobody tried to keep a running tally after that.” [Contested Will: Who Wrote Shakespeare? by James Shapiro, p. 4 of the Prologue]

Just 8 days before Barack Obama was reelected President of the United States, reporter Joe Kovacs wrote, “A well-known Bible-code researcher has bad news for Barack Obama, as he claims hidden texts in the Holy Bible indicate Mitt Romney will be America’s next president. (Moshe Aharon Shak, an orthodox Jew and author of Bible Codes Breakthrough) … For those not familiar with Bible codes, they are said to be secret messages embedded in the Torah, the first five books of the Old Testament. Those who claim the codes’ validity say they disclose information about both the past and the future.”

Heh, heh, heh. We are a funny species, are we not? Methinks Terry Rossio was speaking about all of us when he said, “The magic of a secret decoder ring lies not its ability to code and decode messages, but in allowing children the belief that they possess knowledge worth keeping secret.”

When it comes to treasure maps and coded messages, is there anyone among us who is not a child? You keep your secrets and I keep mine. They are among our most prized possessions. But how often do you hold a secret that means the difference between life and death?

When Miguel de Cervantes wrote Don Quixote de La Mancha in 1605, he was keeping a life-and-death secret and he hid it openly within his book.

The Spanish Inquisition was in full swing. Anyone holding a copy of the contraband New Testament translated into Spanish by Juan Pérez de Pineda would immediately be put to death. Indeed, Julián Hernández had already been tortured for 3 years and burned at the stake for it along with more than 100 other people during the 17 years prior to 1605.

What do you suppose motivated Miguel de Cervantes to quietly shout, “I have a copy of this forbidden New Testament and I’m looking at it right now!” from the pages of Don Quixote? Yet this is precisely what he does in part one, chapter nine, and again in part two, chapter thirty-four, when he describes in detail the complex image on the cover of the forbidden Pineda New Testament.

“Two things can easily be a coincidence, and at a stretch, three,” says my friend Massimiliano Georgini, “but when you have the convergence of four or five indicators, you’re probably no longer looking at a coincidence… In Don Quixote, Cervantes describes the cover of the Pineda New Testament in seven highly specific ways.”

Even more compelling is Georgini’s exposition on the following visual similarity: When the name “QIXOTE” is spelled in Gothic letters, it appears strikingly similar to the classic Greek ICTHYS fish-symbol followed by the Greek spelling for “FISH,” an acronym you’ve seen all your life; one which has been used for two thousand years as a symbol for “Jesus Christ, Son of God, Savior.”

The similarity between
(1.) QIXOTE and
(2.) the fish symbol followed by the Greek letters spelling FISH, could easily be written off as coincidence if it weren’t for this curious passage in part two of Don Quixote, in which Cervantes tells the story of a (fictional) really bad painter:

“Perhaps he would paint a rooster, in such a fashion and so unlike one, that he would need to write next to it in Gothic letters: ‘This is rooster.’ And so it must be with my story, which will require a commentary in order to understand it.”

Massimiliano Georgini has been a highly regarded music producer for more than 20 years, working closely with bands such as Green Day. He holds a degree in Psychology from Purdue University and his Theory of Mind is so compelling that a prestigious government intelligence organization known by its initials recruited Mass one year ago to come to work for them as a cryptographer. His code-breaking of intercepted messages has been so stunningly accurate that more than 90 extremely bad guys were caught in the act and taken off the streets during Mass’s first year on the job.

Oh, I forgot to tell you: The world’s greatest Quixote scholars consider Mass to be a colleague. Massimiliano Georgini was first brought to Wizard Academy 5 years ago by his mentor, Dr. Howard Mancing, a world-renowned Quixote scholar and the author of The Cervantes Encyclopedia.

So, no… Mass Georgini cannot be written off as a wide-eyed fool who sees patterns where none exist. In fact, the little thumbnail sketch I gave you today was just a tiny whiff of his mighty research article published in the Spring, 2012 issue of the scholarly journal of the Cervantes Society of America. Mass calls his article, “Cervantes Lands a Left Hook: Baiting the Inquisition with Ekphrastic Subversion.”

Mass Georgini has proven, to my satisfaction at least, that Miguel de Cervantes disagreed with the Spanish Inquisition and that he shouted so from the pages of his wildly successful book of fiction. But it was a shout that no one would hear for more than 400 years.

Since there is no one else to do it, I will take it upon myself, for it is a thing that needs be done: Massimiliano, on behalf of Miguel de Cervantes let me say “Thank You.”

The shout has at last been heard.

Standing at the lectern, Conan O’Brien looked over the 2013 White House Press Correspondent’s Dinner on Saturday night and said, “As I look around the room and see all the media here tonight, I realize this is just one big high school cafeteria. That’s all it is. Think about it. Fox is the jocks, MSNBC is the nerds. Bloggers are the goths. NPR is the table for kids with peanut allergies. Al Jazeera is the weird foreign exchange student nobody talks to. And print media, I didn’t forget you,” he said. “You’re the poor kid who died sophomore year in a car crash. Yeah. Cheer up, we dedicate the yearbook to you.”