Rise of the Corporate Assassin 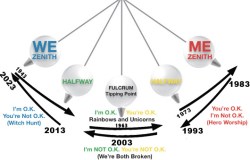 If you’re not being criticized today, then no one was listening when you spoke.

Welcome to the time of the witch-hunt.

This is that time when angry cyber-terrorists post incendiary online reviews and pretend their only motive is to protect the public. This is that time when corporate assassins take pleasure in shooting elephants from a distance; their greatest joy is to ruin the reputation of a prominent man or woman or company. The more the elephant is beloved by the public, the greater the delight of the assassin in bringing them down with a well-aimed bullet to the gut.

Let me explain my motives in writing to you about this trend:

1. I hope to bring you some small measure of comfort in advance. A clear understanding of the social climate can provide a sort of emotional padding and soften the force of the blows when your company is attacked.
2. If you deal with a lot of people, your company will become a target. Think of today’s memo as a general heads-up from the air traffic control tower that some dark storm clouds are gathering on the horizon.
3. Please don’t assume I’m simply venting my own frustrations. I have not been attacked. This memo isn’t about me. The rise of the corporate assassin is just a symptom of the times.

Eighty years ago, when the pendulum of society was last in this position, headed in this direction, Robert Lynd wrote, “There is nothing that makes us feel so good as the idea that someone else is an evildoer.” Our current witch-hunt mentality even extends to the courtroom. If you serve as a juror today, you can reasonably expect at least one of the other jurors to say, “If this person wasn’t guilty, they wouldn’t have been arrested.”

We are indeed living in dangerous times when an accused person is presumed guilty until proven innocent.

How did we get here?

“Working together for the common good” is the dream that launches every We generation. Our original goal was simply to “clean this place up and straighten out this mess,” but we always take a good thing too far. What begins as a happy effort for the common good slowly hardens to become the handcuffs of duty, obligation and sacrifice.

1933 was the last time the pendulum was in this position, headed in this direction. George Bernard Shaw won the Nobel Prize in Literature in 1925 and an Oscar in 1938, so he was familiar with the witch-hunt window of a WE cycle. These are the words he sends to us from the past: “When a stupid man is doing something he is ashamed of, he always declares that it is his duty.”

Consider with me for a moment: A true, civic hero looks for solutions that are within his or her own power to implement. An assassin looks not for solutions, but for problems, and for someone to blame.

The corporate assassin is an accuser, a fault-finder, a nitpicking inquisitor. And when they wear the disguise of a news reporter, they wield the power of public opinion.

Although the corporate assassin has long been recognized as one of the 7 types of journalists, their numbers are on the rise and their attacks are becoming increasingly reckless and unjustified. I hope you’ll remember this when listening to the media. I believe it’s extremely important that we continue to give accused companies and individuals the benefit of the doubt.