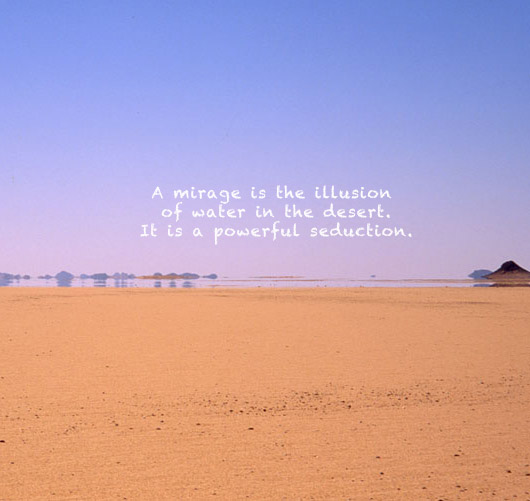 A mirage is not a hallucination, but a misinterpretation.
We see the sky reflected from the ground and we assume it to be water. But it isn’t. That reflection is caused by light passing through cold air that sits on a thin layer of hot air, heated by sun-soaked sand.

1. FaceBook, for business, is a mirage.
Can it successfully gather a crowd to hear a band perform at a bar? Absolutely. Social media, social event. Can it successfully be used by a physically-existing retail or service business as a substitute for mass media? No. It cannot.

A physically-existing business is one that lives in the land of sunlight. A purely online business, by contrast, lives in the light of the plasma screen. Check into those FaceBook success stories and you’ll find them all to be businesses that sprang into existence after 2003. I defy you to find a physically-existing business who enjoyed success prior to 2003 that is now reducing its mass media budget because it has found FaceBook to be a more effective use of ad dollars. You will find no such example. I’ve been looking for 3 long years.

When you see the power of FaceBook to connect people together, you are facing an indisputable fact. When you assume it’s “the next big thing” for business, you are seeing a mirage, an illusion, a reflection caused by hot air.

Google is our phone book, our encyclopedia, our source of ongoing news. Amazon is our bookstore and our mail-order catalog. FaceBook is a party line, a telephone line shared by a large group of people allowing each to listen-in on the conversations of the others.

2. Google’s own data makes it clear: pay-per-click works extremely well for physically-existing businesses that have already built themselves a name. Pay-per-click performs poorly for businesses that aren’t already well known. If the name of your business is a household word in your town, consider investing in local pay-per-click. But if you’re still trying to build your name, put all your eggs into a single mass-media basket and then lift that basket to the sky. The biggest mistake you can make is to spread your ad dollars around, thinking you should “cover all your bases.” You don’t have the money for that. Have courage. Get focused. Talk loud and draw a crowd.

A human being drinks about 180 gallons of liquid per year. This number is essentially carved in stone. When we drink more coffee or wine or expensive beer, we are drinking less of something else. This is a problem for Coke and Pepsi and Budweiser.

A human being consumes precisely 24 hours per day. This number, too, is carved in stone. When we spend time online or playing video games, we are spending less time doing something else. This is a problem for television and radio and the reading of books.

3. There is no “next big thing” on the media horizon. I see only a teeming host of small and medium things. Here’s one of the best of the medium things.

Get an iPhone 5. Use it to collect video of customers giving you real-world, real-time testimonials “in the moment.” Post these testimonials on YouTube and embed them on your website. It’s free. You don’t even need to know what you’re doing. Professional video editors are plentiful and affordable in the cloud.

4. Two of my favorite people won the Superbowl. Paul Harvey spoke to the Future Farmers of America in 1978 and a two-minute clip from that speech rocked the nation during the 2013 Superbowl. When Secret Formulas of the Wizard of Ads became a New York Times bestseller and was named by the Wall Street Journal as the #1 Business Book in America, my pride in those moments was only a pale reflection of the glow I felt when Paul Harvey said my name on the radio when he quoted something I’d written for Radio Ink magazine.

Yes, I know I’ve told you that before. I just never get tired of saying it.

The other big winner was the “Joe Montana stain” washed out of a man’s football jersey by his wife with the help of Tide. Cognoscenti Mark Huffman, resident genius at Procter & Gamble, was the executive producer of that ad. Mark made the first of many visits to Wizard Academy back in 2001. Mark brings magic with him each time he comes.

If you have the freedom, no, even if you don’t have the freedom, shift heaven and earth so that you can join Mark Huffman at Wizard Academy on March 14 and 15. Mark will be teaching, for the first time in his life, with his twin brother, Gene, a famous thinker whom Mark describes with glowing eyes as “a ringmaster in a circus.” This class will be an expanded version of Mark’s class, Measurement and the Mind, (which – to oversimplify it – explains what can and cannot be measured, and how to use your measurements to make specific improvements.) This new class will explore 3 different types of thinking in business: Analytical Thinking, Intuitive Thinking, and Design Thinking.

I will absolutely, positively, unequivocally be there.

Rooms are currently available in Engelbrecht House for the first 12 people who sign up. Mark and Gene will occupy the remaining 2 rooms.

Wow. Wow. Wow. What’s it worth to hang out for 2 days and 3 nights, learning from guys who have detailed knowledge of the information contained in the world’s largest, privately-held repository of advertising experiments and results?

PS – I spend an hour each month telling the answers to questions that took me a lifetime to learn. The next Wizard of Ads LIVE is today at 11am central time. Sean’s already sent me the questions. I’ll be there, will you?