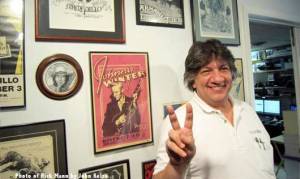 When your friend says something interesting, write it down. Better yet, post it online and give your friend eternal life.

I was whining to Rich Mann over a plate of sushi one day when he reminded me to shut up and be happy. Rich didn’t even look up when he said it. He just mumbled, ‘You may be shoveling horse manure but at least you’re in the parade,’ while trying to decide whether to chopstick a slice of tuna or a piece of spider roll. But his words fell on me like Robert Frost’s *Dust of Snow. I smiled, pulled a receipt from my wallet and scribbled Rich’s statement on it.

Rich’s words reminded me of something Tom Grimes taught me about tribes. “Every tribe has a hierarchy,” he said.

“Give me an example.”

“A football team has a trainer who bandages the players. And if you’re the third-string quarterback who never gets put into the game, you can still look at the trainer and say to yourself, ‘Well at least I’m not THAT guy.’ But even THAT guy – the lowest ranked member of the tribe – gets to watch the games for free from the best seat in stadium and chat with the players in the locker room. Never forget, THAT guy is still part of the team.”

“You may be shoveling horse manure, but at least you’re in the parade.”

What horse manure have you been shoveling in this most wonderful of all parades?

“When I hear somebody sigh that life is hard, I am always tempted to ask, ‘Compared to what?'” – Sydney J. Harris

Elmer Zubiate (Zoo-be-AH-tay) grew up embarrassed that his name was Elmer. After losing everything he owned in 2005, Elmer fought like a tiger to start a little HVAC business in San Antonio. Last year he decided to make the most of the whole Elmer thing. This is what he put on the radio:

There’s Elmer Fudd, Elmer’s Glue, and ME, Elmer Zubiate of Elmer’s One-Hour Air Conditioning and Heating. We’ll be there within one hour of the time we promised you or whatever you need is free. No charge. There’s NO WAY you’re going to wait for US all day. Great prices. Fabulous service. Elmer’s One-Hour.
Dial two one oh, thirty-three Elmer.
[JINGLE]
Two one oh, thirty-three Elmer

I have another friend – and I promise I’m not making this up – who feels the great tragedy of his life was that he inherited 31 million dollars. The way he tells it, he’s never really recovered from that horrible day. He used to moan about it until I finally said, “Shut up, you crybaby. Maybe we should take part of that cash and buy you a spine. And then maybe we can hire an old woman to knit you a pair of balls.”

Strangely, I think he still likes me.

You want to hear something even stranger than that? I actually kind of agree with him: it would be truly horrible to wake up one day and learn that nothing in life required your effort anymore; all you had to do is point and it would be handed to you.