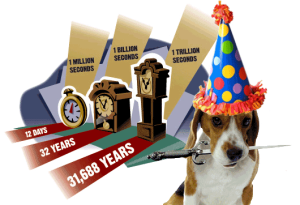 Today I’m going to tell you 3 new things you need to know about.

My enthusiasm will probably make it sound like I’m giving you a sales pitch. Sorry about that. If you’re not in the mood, the tiniest motion of a finger will take you to a new and different place…

You decided to stay? I think you’ll be glad you did.

YouTube. Not FaceBook.
Throughout the year I’ve been saying to students of Wizard Academy, “YouTube will deliver one trillion views during the 365 short days of 2012. It’s a message delivery vehicle that has yet to be maximized. YouTube’s potential to grow a business is vastly greater than FaceBook. The number of search strings typed into YouTube each day is second only to Google.”

You have things to say. Why not say them to the world?

#1 VidBetter is a video production system
that lets goobers like you and me crank out YouTube videos that look like big money. And there’s no learning curve with VidBetter. All the tricky stuff has been fully automated. The hardware comes in a box. Your professional editors are in the cloud and available to you 24/7. Take a look.

#2 Do you talk better than you write?
Dave Young and Paul Boomer have created a content-extraction service that pulls your very best out of you and puts it on paper. It’s a fabulous way to create witty and intelligent blog posts, craft award-winning web copy, record relaxed and informative podcasts, write training manuals, create policy and procedure documents, whatever it is you need to get out of your head and onto the web or onto paper. All you have to do is talk on the phone to a professional interviewer. BAM. The whole thing is recorded, transcribed, edited, and given back to you in whatever format you desire. These guys will make you sound like a genius. Check it out.

#3 Become a happier you.
Kyle Cease was voted the #1 comedian on Comedy Central in 2009 but his real passion is for transformative change. I’ve watched him lead his classmates through exercises that made a profound difference in their thought processes, their attitudes, and their expectations. When his 2-day class was announced a couple of weeks ago, the classmates who had already met him snapped up all the rooms in Engelbrecht House immediately. If you want 2013 to be VERY DIFFERENT than 2012, be at this class. Sleep in a hotel. Don’t tell yourself that you’ll catch Kyle’s class next time. Kyle did more than 200 shows last year and right now he’s hotter than ever. It took weeks to find dates for this class that would work in his schedule for 2013. It will be awhile before we can get Kyle back to Austin. This will be a highly interactive, fast paced, experiential workshop. You will definitely leave better than you came.

But God’s okay with that. He understands.

Hopefully you do, too.

* Think all those YouTube views are just a bunch of teenagers watching a hundred videos a day? While it’s true that YouTube reaches 67% of the US population 18-34, it also reaches 59% of the 35-49 population, 52% of the 50-64 population and 48% of the 65+ population. Want to see a video on how to do something? Install a sink? Rig a block and tackle? Change a filter? Type it into YouTube and a self-appointed expert will appear. What do you know how to do that you’d be willing to share for free in exchange for worldwide recognition?