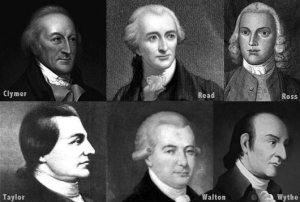 Voltaire is often quoted as having said it, but he never did.

It was actually Pierre de Beaumarchais in 1775, just a few months before Thomas and George and Ben and the boys wrote their scathing letter to England’s king.

Beaumarchais was working on the second scene in the first act of The Barber of Seville, when it hit him, “Aujourd’hui ce qui ne vaut pas la peine d’être dit, on le chante.”

“Anything too stupid to be spoken is sung.”

Now before you get all hinky-dink and say, “But George Washington didn’t sign the Declaration of Independence,” allow me to assure you that my statement is six times correct: Clymer, Read, Ross, Taylor, Walton and Wythe. Georges all. Declaration signers.

Isn’t it funny how the mind makes assumptions based on fragments of information? I gave you 1775, Thomas, George, Ben and the boys, and a letter to England’s king. You thought, “Revolution, Jefferson, Washington, Franklin and the founding fathers, and The Declaration of Independence they sent to King George.”

Your mind filled in the empty spaces.

But what if there were no empty spaces?

What if the mental bandwidth of your attention was filled with other information?

Fill some of that vacancy with music and you’ve got a song.

Allow me to get back on track: song lyrics don’t have to make sense because words that are wrapped in music aren’t held to the same level of scrutiny as words that must stand on their own.

Every language is made of obstruent and sonorant phonemes with the vowels of the language supplying the musical tones. The letters of the alphabet are not phonemes. The sounds represented by those letters – and certain combinations of letters such as sh, th, ch, ng, – the sounds are the phonemes. (I’m not making this stuff up. It is a studied and known science. We can look further into it in the rabbit hole, if you like.)

Humans are uniquely gifted to attach complex meanings to sound. Some of these sound-messages are the combinations of phonemes we call words, but a complex sound-message without phonemes is called music. Mix phonemes with music and you’ve got a song.

Words wrapped in music are no longer strictly words, but components of a complexly woven auditory tapestry with additional messages embedded in the pitch, key, tempo, rhythm, interval and contour of the tune. Song lyrics cannot be easily evaluated until they’ve been separated from the music that has swallowed them.

On September 12, 2001, the day after 9-11, the most-played song in America was Bruce Springsteen’s Born in the USA. This is a fact. Radio stations across America wanted to lift the mood, remind us of our heritage and defy Osama Bin Laden, so they filled the sky with our favorite anthem to American exceptionalism:

“Born down in a dead man’s town,
The first kick I took was when I hit the ground.
You end up like a dog that’s been beat too much
Till you spend half your life just covering up.
Born in the U.S.A., I was born in the U.S.A….

Those lyrics get increasingly sad, describing rejection and defeat without redemption, as a returning Viet Nam vet can’t find a job even though he turns to the Veteran’s Administration for assistance. In the end, he winds up working without hope in the shadow of a penitentiary and he blames it all on the fact that he was born in the U.S.A. The End.

Yet we shout the chorus to Born in the USA at the top of our lungs because the triumphant arc of the music and the defiant tone of Springsteen’s voice feel profoundly patriotic and proud, lyrics be damned.

Music is a language of emotion so powerful that it is capable of contradicting the very words it carries. Control the music and you control the mood of the room. But choose the music for its feel, never for its lyrics.

Sound is a stunning phenomenon.

Learn how to use it, then choose whom you would like to stun.