Time is a Solvent 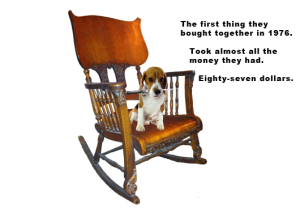 An auction house is an island of cast-offs and misfits where the rejected and broken feel finally at home.

I am speaking of the merchandise, of course, not of the people.

Perhaps I am speaking of the people, as well.

From the age of 18, Pennie and I have searched for buried treasure in auction houses. When you collect the misfit and the broken, you quickly learn how to accentuate natural beauty and disguise the inevitable flaws. These are valuable skills for a marketing consultant.

There is magic in that moment between Before and After.
The most miraculous makeovers happen when the misfit is made of wood. Formby’s Conditioning Furniture Refinisher is an amazing solvent that dissolves old varnish, lacquer and shellac, gently melting the crackled, grimy layers of age into a homogenous, flowing liquid.

It’s not a stripper, exactly. Formby’s refinishing solvent merely allows you to redistribute the accumulated weirdness that was already there, giving the piece a rich, original, old finish.

Time is like Formby’s Refinisher; a solvent dissolving memories and events into one another, creating altogether new realities based only loosely upon the ones that were before.

The past was reality. But it does not remain reality.

What is today’s reality? Yours, I mean.

My mind has been topsy-turvy for a year. Last month marked the first anniversary of the death of a lifelong friend. I am only just now beginning to regain my balance.

A couple of weeks before the anniversary of his death, I contacted his right-hand man of many years and asked him to organize a “memory party” with good food and fine wine to be held on the anniversary of our pal’s departure. I sent a significant budget and asked that he invite everyone who might have a story to tell about our friend.

I believe good stories need to be spoken into the living memories of others, a sort of cross-pollination of realities.

The party was a big success. Lots of people came and I’m told the stories were wonderful. I’ve decided to make it an annual event.

I suspect that in the not-too-distant future, citizens who never met my friend will be able to share sparkling memories of moments with him that never really happened.

And it is possible that these true stories will be the most magic of all.

Myths and legends are true, you see, even when they are not.