How Radio Ads Must Change 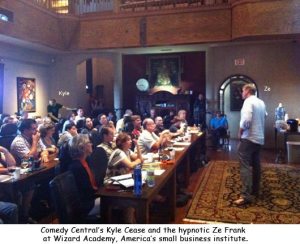 We can listen much faster than we speak. Consequently, a listener’s mind will wander when we take too long to make a point. This isn’t new. What is new, however, is the current trend toward voluntary, rapid distraction. Defenders of this practice call it ‘multi-tasking.’ But brain-imaging studies reveal that ‘multi-tasking’ is merely the switching of attention back and forth between two tasks.

The danger of multi-tasking is that it trains the brain to be more easily distracted. Combine this with the exponential growth of information that assaults our brains each day and you’ll see why – and how – radio ads must change.

Information saturation has risen to the point that an auditory neuroscientist at Brown University, Seth Horowitz, published a stern warning about it in the Nov. 9, 2012 issue of the New York Times: “Listening is a skill that we’re in danger of losing in a world of digital distraction and information overload.”

In other words, few people these days can listen to a single voice drone on and on about a product or service for sixty, or even thirty, seconds. The only way for an ad to elbow its way into the customer’s fragmented attention is to become the most interesting and surprising thing that’s happening at that particular moment.

Horowitz goes on to explain that focused attention is what separates mere hearing from active listening. “Attention is not some monolithic brain process. There are different types of attention, and they use different parts of the brain.”

1. The sudden loud noise that makes you jump activates the simplest type: the startle. A chain of five neurons from your ears to your spine takes that noise and converts it into a defensive response in a mere tenth of a second. This simplest form of attention requires almost no brains at all and has been observed in every studied vertebrate.

2. More complex attention kicks in when you hear your name called from across a room or a birdcall in an underground subway station. This stimulus-directed attention is controlled by pathways through the temporoparietal and inferior frontal cortex regions, mostly in the right hemisphere — areas that process raw, sensory input, but don’t concern themselves with what you should make of that sound.

3. When you actually pay attention to something you’re listening to, the signals are conveyed through a dorsal pathway in your cortex, a part of the brain that does more computation, which lets you actively focus on what you’re hearing and tune out sights and sounds that aren’t as immediately important.

A high percentage of radio ads are being tuned out because they are judged by the brain to be “not immediately important.” Radio has not yet embraced the giddy pace of 2012.

To embrace the new pace:
1. Talk faster, say more.
2. Use big ideas, presented tightly.
3. Introduce a new mental image every 3 to 5 seconds.
4. Use fewer adjectives.
5. Embrace unpredictable timing and intonation.
6. Say things plainly. Bluntly, even.
7. Emotion is good. Even negative emotion.
8. Allow distinctly different voices to finish each other’s sentences.
9. Prepare for lots of complaints. Listeners want to be able to ignore radio ads. When they can’t ignore your ads, they complain. A lot.
10. Prepare to make more money.

We have proven this technique works, but you can definitely take it too far: the confusion that results from going too far is a condition I call Cloud Atlas. (Those of you who are laughing right now have seen the movie.)

Would you like to listen to a performance of numbers 1 through 7 simultaneously? Visit YouTube and type “Ze Frank The Doctor’s Office.” Watch the video and you’ll realize that Ze requires your entire attention just to keep up with him.

These are the tightly-connected, verbally-delivered surprises that will bloody your nose in the first 30 seconds of this delightful video:

Those first 14 ideas are delivered at an average pace of one idea every 2.15 seconds. But the story continues:

Wow. Twenty-four ideas in 60 seconds is exactly 1 idea every 2.5 seconds. Give Ze’s verbal riff 60 seconds and I promise you’ll keep listening. And you’ll laugh when he says “Australian puke me,” because strangely, it will make perfect sense.

How to do this – across all media – will be the focus of a 2-day workshop called How to Advertise in a Noisy World. You need to be there.

One Response to How Radio Ads Must Change