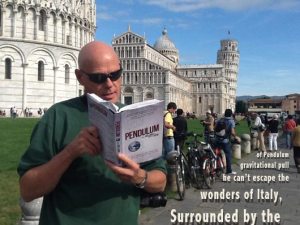 Pennie and I were at the airport in San Francisco about to board a flight for home. I needed a book to read.

I’d been thinking about the halfway points in Pendulum theory as well as pondering a phenomenon I’ve decided to call Information Saturation. Both are heady topics. I needed to take a break.

Whether halfway up or halfway down, the Pendulum is in the same position. Consequently, the motivations and values that drive our society will be surprisingly similar even though these halfway points are 20 years apart. There will be striking parallels in the inventions we create to satisfy the hungers we feel, and our most popular music and literature will reflect surprisingly similar fixations and orientations at every halfway point of a “We.” A different set of fixations and orientations occupy us at the halfway points of a “Me,” but they are no less predictable.

I walked into the airport bookstore and spotted Ray Bradbury’s Fahrenheit 451. I’d heard people speak of this book, but I had never read it. At just 46,118 words Fahrenheit is a slim volume, but that hasn’t keep it from selling more than 10 million copies. I looked at the date of publication: 1953.

I bought the book. Soon I was reading highly accurate descriptions of Information Saturation. On page 52, Beatty describes to Montag the condition of media in their society:

“Picture it. Nineteenth-century man with his horses, dogs, carts, slow motion. Then, in the twentieth century, speed up your camera. Books cut shorter. Condensations. Digests, Tabloids. Everything boils down to the gag, the snap ending.”

“Speed up the film, Montag, quick. Click? Pic? Look, Eye, Now, Flick, Here, There, Swift, Pace, Up, Down, In, Out, Why, How, Who, What, Where, Eh? Uh! Bang! Smack! Wallop, Bing, Bong, Boom! Digest-digests, digest-digest-digests. Politics? One column, two sentences, a headline! Then, in mid-air, all vanishes! Whirl man’s mind around about so fast under the pumping hands of publishers, exploiters, broadcasters, that the centrifuge flings off all unnecessary, time-wasting thought!”

“If you don’t want a man unhappy politically, don’t give him two sides to a question to worry him; give him one. Better yet give him none. Let him forget there is such a thing as war. If the government is inefficient, topheavy, and tax-mad, better it be all those than that people worry over it. Peace, Montag. Give the people contests they win by remembering the words to more popular songs or the names of state capitals or how much corn Iowa grew last year. Cram them full of noncombustible data, chock them so damned full of ‘facts’ they feel stuffed, but absolutely ‘brilliant’ with information. Then they’ll feel they’re thinking, they’ll get a sense of motion without moving. And they’ll be happy, because facts of that sort don’t change.”

Ten years ago, while being interviewed about Fahrenheit 451, the late Ray Bradbury said,

“Fahrenheit’s not about censorship. It’s about the moronic influence of popular culture through local TV news, the proliferation of giant screens and the bombardment of factoids. We’ve moved in to this period of history that I described in Fahrenheit 50 years ago.”

Wow. This Pendulum stuff is real; frighteningly predictive, profitably instructive, and highly propulsive. 1953 was the halfway point of a “We.” 2013 will be another. Is there anything we can learn from 1953 that will help us succeed tomorrow?

During a meeting of the directors of Wizard Academy last week, I was asked to share my thoughts on the climate for small businesses in our society. I shared with the board my concerns about Information Saturation and how this phenomenon is making it harder for advertisers to gain and hold human attention. “How can a business fight back?” they asked. “What can be done to defeat the auditory and visual noise?”

Chairman Mark Fox said, “I want you to teach a class on this. Set a date right now.” Mark opened his laptop. “I’m putting it on my calendar to be there.”

The other 6 board members flipped opened their laptops and said, “Me, too.”

This is when Mark said the comment he receives from students most often is that I should offer advanced training on the creation of third gravitating bodies. Evidently, the cognoscenti of the Magical Worlds Communications Workshop realize the power of the 3GB technique they learn on the third and final day of that class, but feel the need for additional exercises and examples.

The time for that is now.

How to Advertise in a Noisy World:
Piercing Information Saturation
with Third Gravitating Bodies.
January 23-24, 2013.

Register for it at WizardAcademy.org and accelerate past your challengers.