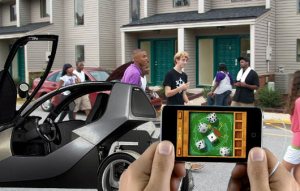 Travel agencies were eliminated as a business category when the Digital Age arrived. Likewise, encyclopedias found they were no longer needed. Soon we were opening the newspaper each morning to read headlines we already knew about. Newspaper doubled over in pain and fell to its knees. The Yellow Pages got dusty and catalogues quit arriving in the mail.

“Why print on paper when we can put our stuff on a computer screen that’s already in the customer’s home?” A single, online catalogue company – Amazon.com – now facilitates 25 percent of all the online purchases in the United States.* And isn’t a blog just an electronic diary, a journal open to public view?

Electronic media has been damaged far less than print media by the arrival of the Digital Age. In short, TV and radio are doing just fine.

Right now you’re thinking, “But what about iPods and Pandora and smart phones and online listening and satellite radio? Does anyone listen to regular radio anymore?”

Research Director tells us the average American spends only 15.4 hours a week listening to the radio these days, a decline of 11 percent since 1970. Media Audit says the decline is 13 percent, down to just 17 hours per week. And a 2010 Bridge Ratings study puts the decline at 18 percent, bringing the average down to about 18 hours per week in radio listening. Obviously, these research firms don’t agree on the details, but they do agree on this: Radio alarm clocks wake America in the morning and radio remains our companion in the car. People who work alone at night – about 14 percent of our nation – think of the radio as a friend.

But what about right now, today?

My clients across America currently air 52-week radio schedules on more than 700 radio stations, so it can reasonably be said that I’ve spent a few hundred million dollars buying airtime over the past 25 years.

Radio is considered “mass media” for a reason: It reaches the unwashed, unfiltered masses. Rich and poor alike. Homeowners, apartment dwellers, and children still bumming a room from their parents. Generally speaking, radio is not good at targeting specific types of persons, but it’s great for building a reputation. If you want the public to think of you when they need what you sell, a nonstop radio schedule will work wonders.

But don’t fall into the trap of overpaying to be on the “right” station. Radio goes fishing with a net, pulling up thousands of fish with each pass through the waters. If you want to sit on the riverbank with a pole and a hook and target a specific type of customer, use magazines or a list or invest in Google Adwords. But know this: the success of your ad campaign won’t be determined by your choice of media. The success of your ad campaign will be determined by your choice of message.

Weak ads fail, regardless of which media delivers them.

Strong ads succeed, regardless of which media delivers them.

How strong are your ads?

Want to make them stronger?

* When I was a kid, the Sears-Roebuck catalog was in every home in America. Sears was the 900-pound gorilla of retail. Yet with sales of 41 billion dollars in 2011, Sears is currently 20 percent smaller than Amazon.com. Sears has heritage, history, deep pockets, a good website and vast showrooms with immediately-available inventory all across America. But they made one critical miscalculation…