How Jack Became a Dull Boy 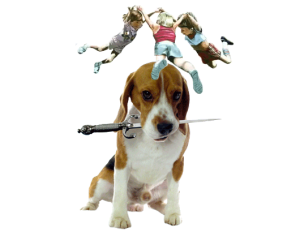 Jack became dull when he failed to free the beagle in his brain. You let your beagle romp and play, don’t you?

The beagle in your brain connects nonlinear events – think of these events as a collection of dots – to reveal fantastic patterns.

Intuition. Humor. Leap of Faith. These are just three of the beagle’s names.

The beagle is not limited to paired opposites but lives in a place of infinite possibilities. Fantasy and fiction, poetry and song, symbols, rituals and metaphors beckon us into that realm where anything can happen in the color-stained shadows beneath the beagle’s grand forest canopy. Every stick is a sword, every rabbit is an adventure and every tree becomes home base the moment you begin to run.

“All work and no play makes Jack a dull boy” first appeared in a book of collected proverbs published by James Howell in 1659, but it was generations old, even then.

An article by Dr. Peter Gray in Psychology Today proves the potency of this 353 year-old warning. Dr. Gray is a research professor of psychology at Boston College. His findings guide the decisions of comparative, evolutionary, developmental and educational psychologists around the world. He has written important articles on innovative teaching methods and alternative approaches to education. He is the author of Psychology, an important college textbook now in its 6th edition.

Dr. Gray has recently been studying “the dullest culture on earth,” a people so painfully boring that previous researchers concluded they could not be studied. There was nothing to see, nothing to ask, nothing to probe or investigate among the Baining, an isolated tribe in Papua, New Guinea.

According to Dr. Gray, “They do not tell stories, rarely gossip, and exhibit little curiosity or enthusiasm. Their conversation is obsessively mundane, concerned primarily with food-getting and food-processing.”

The Baining, you see, do not believe in play. In fact, Baining children are punished when they do frivolous things. The Baining believe only in productive work and “things that make sense.”

The Baining make no room in their minds for romance, fantasy or adventure. They don’t even allow imitation. There are no Baining religions or heroes or humor, no Baining poetry or legends or music. Sex is an unpleasant chore endured only for the production of children. The single Baining ritual is a firedance that initiates boys into manhood. Women and children are not allowed to watch.

I promise I’m not making this up. I’m not even exaggerating.

Dr. Gray’s report paints a picture so dreary and sad that he opens it by assuring us that he is not a racist. “This essay is clearly not about race but about culture, and if there is value judgment, it is judgment grounded in my own culturally-produced biases.”

“All work and no play makes Jack a dull boy, and it apparently makes the Baining the ‘dullest culture on earth.’ In some ways, I fear, we today are trying to emulate the Baining as we increasingly deprive children of opportunities to play and explore freely and, instead, force them to spend ever more time working in school and participating in adult-directed activities outside of school.”

I agree with all that, but I took something different from Dr. Gray’s report, namely this: if we don’t make time for intuition, humor and leaps of faith, if we don’t make room for romance, fantasy and adventure, then we don’t know Jack.

But it’s very possible we’re on our way to being him.

And Jack is a very dull boy.

“Pendulum offers fascinating insights into the surprises and revelations of shifting social trends throughout history. Roy H. Williams and Michael Drew answer the age-old question: What makes us tick?”
—Harvey Mackay, author of the #1 New York Times bestseller Swim With the Sharks Without Being Eaten Alive

Politics, manners, humor, sexuality, wealth, even our definitions of success are periodically renegotiated based on the new values society chooses to use as a lens to judge what is acceptable.

Are these new values randomly chosen,
or is there a pattern?

Pendulum chronicles the stuttering history
of western society, that endless back-and-forth swing between one excess and another, always reminded of what we left behind.

Pendulum explains where we have been as a society,
how we got here, and where we’re headed. If you would benefit from a peek into the future, you would do well to read this book.