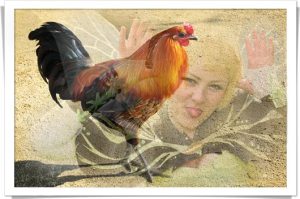 Courage might look like confidence to onlookers but confidence and courage are not the same. Confidence means you’re not afraid. Courage means you do your best even though you’re scared half to death. Courage does not rely on confidence. Courage relies on commitment.

“It embarrasses me to admit that there have been seasons in my life when I was so full of myself that there was no room for anyone else.”
– Richard Exley, Dec. 12, 2011

(Richard has been a close friend for 30 years. I have witnessed these seasons in him as he has witnessed them in me. – RHW)

Confidence without humility is arrogance.
Humility without confidence is an inferiority complex.

The single prerequisite of true humility is that you must first have confidence.

The false humility of inferiority is really just anger in a sad disguise.

Courage is good,
confidence is better,
but humility is the highest lesson
and much harder to learn than the previous two.

“There is a strange duality in the human which makes for an ethical paradox. We have definitions of good qualities and of bad. Of the good, we always think of wisdom, tolerance, kindliness, generosity, humility; and the qualities of cruelty, greed, self-interest, graspingness, and rapacity are universally considered undesirable. And yet in our structure of society, the so-called and considered good qualities are invariable concomitants of failure, while the bad ones are the cornerstones of success. A man – a viewing-point man – while he will love the abstract good qualities and detest the abstract bad, will nevertheless envy and admire the person who through possessing the abstract bad qualities has succeeded economically and socially, and will hold in contempt that person whose good qualities have caused failure. When such a viewing-point man considers Jesus or St. Augustine or Socrates he regards them with love because they are the symbols of the good he admires, and he hates the symbols of the bad. But actually he would rather be successful than good.”
– John Steinbeck, Sea of Cortez, p. 96, (1941)

Begin by learning courage. Stare into the face of the tiger that threatens to devour you. Be the excellent soldier who runs toward the sound of the guns. You will do these things not because you are fearless, but because you have chosen to. And when you have stared down tigers and emerged from battles undead, you will notice that your courage has grown into a strutting little rooster called Confidence.

And then one day long after, if you are open-minded, open-hearted and wise, you will realize that your successes were never born from the strength of your will, the razor’s edge of your intellect or the power of your focused mind, but from the whim of an inexplicable little fairy called Luck.

Laugh at the rooster,
Tip your hat to the fairy,
And smile.

The alumni who attended a few months ago are reporting fabulous results from Manley Miller’s Fundraising for Non-profits, Churches, Politicians and Educational Institutions: The Definitive 12 Techniques. The next session is September 25-56. Sign up?

This week on Monday Morning Radio:  Listen in on Dean Rotbart’s interesting interview of Holly Hamann, the entrepreneur who has helped launch six successful startups.  Entrepreneur Magazine just named her latest venture, Blog Frog, as one of its “100 Brilliant Companies.”

Blog Frog connects clients with popular bloggers to generate peer-driven content on topics including food, fashion, parenting, fitness and technology. Its clients include such big dogs as Intuit, KinderCare, Shutterfly and Subway.

One Response to Courage, Confidence and Humility