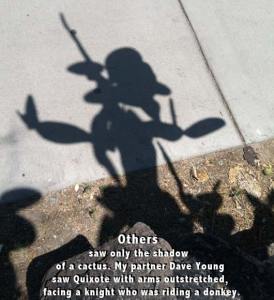 Dave saw adventure where others saw only shadows because Dave is a creative genius who never forgot how to play.

The mind wants closure, for everything to add up and make sense, for there to be no loopholes, paradoxes or remainders. Intellect wants to believe that it has the answers, that is sees beyond broken logic, that it is ultimately in control, that there is no force greater than itself.

In short, humans want to be their own god but we are poorly equipped for the job.

The study of Magical Thinking includes the examination of common superstitions, justifications and self-delusions. Think you don’t have any? Think again.

The same insanity that allows us to believe in a god who has everything “under control and moving forward according to His Perfect Plan” also allows us to believe that the Higgs boson particle is somehow proof that the vast diversity of plant and animal life on this planet is the accidental result of an explosion.

“GOD, we are a comic species. Why are you interested in us?” This is a question that’s been asked for at least 3 thousand years. Indeed David, player of the harp and slayer of Goliath asks GOD in the 8th of his Psalms, “What is a human being that you think about him? What is a son of man that you take care of him? You made him a little lower than the heavenly beings. You placed on him a crown of glory and honor. You made human beings the rulers over all that your hands have created. You put everything under their control.”

On a practical level, an understanding of Magical Thinking – this amazing propensity of humans to jump to ridiculous conclusions and become deeply bonded to them – is the most powerful sales tool on which you will ever lay your hand.

Fortunately, our not-quite-sane ability to imagine and believe in the unproven, the unlikely and the clearly impossible is not just proof of our brokenness, it is also our greatest gift and highest treasure. Magical Thinking allows us to see possibilities not indicated by the evidence at hand. Intuition depends upon it. Breakthroughs happen because of it. Undiluted play is at the heart of it.

Play. Do you remember it? Dave Young was playing when he saw Quixote in the shadow ofthe cactus.

Stated in the simplest of terms, Magical Thinking describes potentialities that are not strictly possible, but are believable nonetheless. And these potentialities can be positive or negative.

The obvious question is, “What is a potentiality?”

You’re a young man who is about to ask the love of your life to marry you. Special circumstances give you the opportunity to buy a diamond engagement ring for a fraction of its true value. The previous owner was a woman who was murdered by her husband. He then fled the country with all of his assets. The ring is being sold by the cemetary that buried the woman. Do you buy the ring and present it to your fiancé as a symbol of your love?

Why not? Diamonds and gold are inert. They have no memory and carry no contagion, no karma, no bad juju. You know this in the left hemisphere of your brain, but Magical Thinking tells you otherwise in your right.

When you understand the seductive pathways of Magical Thinking you’ll be able to write advertising and web copy that causes people to choose you, your company and your brand, above all others, even when it defies common sense.

Magical Thinking works like magic, allowing the magician to pull rabbits from hats that everyone knows to be empty.

Roy H. Williams
Magical Thinking is investigated and taught to businesspeople nowhere in the world but Wizard Academy, a business school unlike any other. Will you be part of the inaugural session of Magical Thinking in Business with Jumpin’ Jeff Sexton and Movin’ Michele Miller?

This week on Monday Morning Radio: Peter Nevland was as an engineer for Motorola until he decided to engineer words instead. Dean Rotbart asks Peter about his popular “How to  Write” workshops and interrogates him about his belief that absolutely everyone can and should improve their writing skills.

Become a Member of Wizard of Ads LIVE.