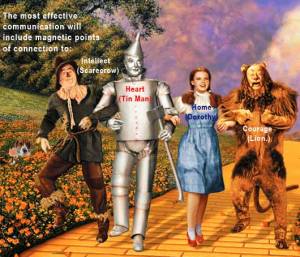 Roughly 400 years before the wise-ards followed their star to Bethlehem, a Greek physician recognized four basic styles of behavior, calling them Choleric, Phlegmatic, Melancholic and Sanguine in the mistaken belief that these observable patterns of behavior were triggered by excesses of certain bodily fluids. Today’s Myers-Briggs Type Indicator, DiSC, True Colors and The Behavior Style Assessment are merely scientific instruments based on refinements of Hippocrates’ original observation.

Courage (Lion) Heart (Tin Man) Home (Dorothy) and Intellect (Scarecrow) are the pillars in the Palace of the Temperaments. Strong communications have points of connection to each of these four pillars.

If you are wise, you will speak to each of these 4 people every time you attempt to persuade. Put something in your presentation for each of them. This is called “inclusive communication by design.”

Most of us attempt to persuade as though everyone makes decisions according to the same criteria we use. But they don’t. There is a Scarecrow, a Tin Man, a Dorothy and a Lion in every crowd and you must speak to each in the language they prefer.

Speak to all four preferences and your voice will carry rich harmony.

We see the quartet from Oz everywhere we look.
Jefferson is the intellectual Scarecrow of Rushmore.
Lincoln is its big-hearted Tin Man.
Washington is America’s great stone Dorothy.
Roosevelt is our reckless rock Lion.

We spoke last week about these same archetypes found in the principal characters on Desperate Housewives. Indeed, it’s virtually impossible to create succesful fiction without characters who embody each of these four preferences.

My partner Chuck McKay wrote about inclusive communication by design in 2006 and another partner, Jeff Sexton, wrote about it in 2007. Both were inspired by that great psychologist Dr. Richard D. (Nick) Grant, one of the founding board members of Wizard Academy. Jeffrey and Bryan Eisenberg also speak of Dr. Grant in their bestselling books, Call to Action and Waiting for Your Cat to Bark?

Ten of my Wizard of Ads partners are going to be certified as Myers-Briggs instructors and facilitators this autumn. Would you like to join them and get certified yourself? There are only 3 seats left in this 4-day class. Cost will be $4,000 and will incude a room and meals in Engelbrecht House, Wizard Academy’s amazing student mansion. Acadgrads, as always, receive a 50 percent discount. (Call Becke at 512-295-5700 during Central Time business hours to register.)

I’m secretly hoping the lucky 13 candidates will be treated to a surprise visit from Dr. Grant. Back in 2000 when Wizard Academy first began, we miraculously had a recorder turned on while Dr. Grant was riffing about the four temperaments. He said,

“You probably remember that on the old Star Trek there were four principal male characters. Those were the four temperaments, that’s why it worked.”

“There was Scotty, the SJ engineer that took care of the infrastructure, ‘I can’t make it go any faster, Captain!’” (Dorothy, Washington, Charlotte)

“Then there was Bones, the doctor, the compassionate NF who took care of people, ‘Dammit, Jim, I’m a doctor, not a doorknob!’” (Tin Man, Lincoln, Carrie)

“So that’s why that show worked, that’s why it was so wonderful; it had all four temperaments.”

Temperaments. Preferences. Archetypes. These have nothing to do with abilities. Zero. Nothing. But to understand these basic 4 temperaments is the beginning of more effective and successful communication.

Understand the preferences and your team will work more smoothly together, your ads will pay higher dividends and you’ll live a more exciting love life.

Or you could just keep doing what you’ve been doing.