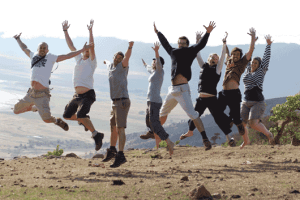 A Message at Graduation Time

The person who achieves spectacular failure
has at least attempted something bold.
Failure is a temporary condition.
Success is likewise temporary.
Life, itself, is temporary.
So quit hesitating.
Do something.
Mediocrity comes from having perfectly implemented tried and true, traditional wisdom.

The outcome is the only thing that separates confidence from hubris. If your bold idea succeeds, you were a confident visionary. If your bold idea fails, the walking dead will accuse you of being full of yourself. “It was hubris,” they will say.

Ignore the zombies. Life is risk. Risk is life. The only death is mediocrity. The only stupidity is fear. Fling yourself into something uncertain. The view from the edge is spectacular. What the hell, go ahead and put all your eggs in one basket. If you lose those eggs, you can find some more. The world is covered with eggs.

Zombies invented the lie that curiosity killed the cat. But it wasn’t curiousity that did her in. It was boredom.

Security, boredom and a bloodless life are all the zombies have to offer. But if you follow your Beagle of Intuition into the Forest of Uncertainty, you’ll ask directions of angels and they’ll answer you by opening a door you never knew was there. You’ll kiss the hand of Serendipity as you gaze upwards into her face. And she will smile.
Zombies tell many lies.
Their most famous lies are:

1. A college degree is the key to getting a good job.
2. If you give your money to financial experts they will grow it into a fortune. (Strangely, this second lie is partly true. But often, the only fortune those experts will grow your money into is their own.)

And there is a miracle inside every one of them.

PS – We’re only a few months away from entering the second half of the upswing of our current “We” cycle in this amazing 3,000-year Pendulum of Western Civilization. Compliance and conformity are not only admired in the second half of a “We,” but expected. (Have you noticed the current trend toward “best practices”? They’re being trumpeted everywhere.) Compliance and conformity are definitely on the rise. Few people experiment anymore. Everyone seems to be waiting for someone else to tell them what to do.

Today’s MMMemo is just my tiny, little way of reminding you that the forever tug-of-war between “Me” and “We” is essentially a choice between two good things. And we always take a good thing too far in the second half of an upswing. If we were wise, we would try to hang on to the good parts of “Me” as we rid ourselves of its excesses. Self-reliance, individuality and freedom of expression are good things; they’re just currently out of fashion. Sigh. – RHW

My longtime friend Dean Rotbart has agreed to host a weekly
radio show featuring you, the friends and alumni of Wizard Academy.
More details in next week’s MMMemo.

A NOTE FROM INDY.
My man Ted was an expert on zombies:

“The credit belongs to the man who is actually in the arena; whose face is marred by sweat and blood; who strives valiantly; who errs and comes short again and again because there is no effort without error and shortcoming; who knows the great enthusiasms, the great devotion, spends himself in a worthy cause; who at best knows in the end the triumph of high achievement; and who at worst, if he fails, at least fails while daring greatly, so that his place shall never be with those cold and timid [zombies] who have never tasted victory or defeat.”