The Future of Talk Radio 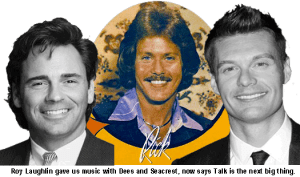 Brother Laughlin uttered this phrase as he was telling me of his involvement in the development of two new daily radio shorts involving Regis Philbin and Larry King. Living as he does in Los Angeles, Laughlin sees crowds headed in the same direction long before these crowds are visible to the rest of us.

Laughlin managed KISS-FM during its glory years under the ownership of Gannett, then Jacor, then Clear Channel. I’ll never forget the day in 2004 when “Other Roy” called to say, “I’m thinking about replacing Rick Dees with this new kid, Ryan Seacrest. Do you think I’m nuts?” Laughlin often thinks out loud in my ear. It helps him, somehow, to hear himself say what he’s thinking. He finds it useful. I find it interesting.

I hadn’t really thought about it but I instantly knew he was right. (Calm down, music radio junkies. Evolutions like this don’t happen overnight but I do believe we’ll see a steady trend toward FM talk for at least the next 10 years.)

My confidence in the correctness of Laughlin’s prediction is rooted in my study of Society’s 40-Year Pendulum, a theory that says public opinion is driven by the energies of a duality, the “Me” and the “We.” Each of these, when balanced by the other, is a good thing. But we always take a good thing too far. Then, suffering the consequences of our own mania, we hunger for what we left behind and begin a 40-year journey to the other extreme.

These are the opposing values that drive the Pendulum:

“Me,” the individual, unique and special and possessing unlimited potential

1. demands freedom of expression
2. applauds personal liberty
3. believes one man is wiser than a million men, “A camel is a racehorse designed by a committee.”
4. wants to achieve a better life
5. is about big dreams
6. desires to be Number One. “I came, I saw, I conquered.”
7. admires individual confidence and is attracted to decisive persons
8. believes leadership is, “Look at me. Admire me. Emulate me if you can.”
9. strengthens a society’s sense of identity as it elevates attractive heroes.

The most recent 20-year upswing of the Pendulum into “Me” values began in 1963 with the Beatles song “I Want to Hold Your Hand.” Self-indulgence and freedom of expression reached their zenith in 1983 with Michael Jackson’s “Thriller.” Every zenith of “Me” is marked by plastic, hollow posing and outlandish costumes as each of us struggles to be unique.

“We,” the group, the team, the tribe, the collective

1. demands conformity for the common good
2. applauds personal responsibility
3. believes a million men are wiser than one man, ”Two heads are better than one.”
4. wants to create a better world
5. is about small actions
6. desires to be a productive member of the team. “I came, I saw, I concurred.“
7. admires individual humility and is attracted to thoughtful persons
8. believes leadership is, “This is the problem as I see it. Please consider the things I am telling you and perhaps we can solve this problem together.“
9. strengthens a society’s sense of purpose as it considers all its problems.

“Me“ and “We“ are the equal-but-opposite attractions that pull society’s Pendulum one way, then the other.

The 20-year Upswing to the Zenith of “We“ (1923–1943) is followed by a 20-year Downswing as that “We“ cycle loses energy (1943–1963). Society then begins a 20-year Upswing into “Me,“ (1963–1983) followed by another 20-year Downswing as the “Me“ cycle loses energy (1983–2003). We’re currently headed toward the zenith of “We,” when our beautiful dream of “working together for the common good” calcifies to become conformity, obligation and sacrifice. In the final phase, these hard virtues evolve yet further to become legalistic intolerance and self-righteous judgementalism.

Please don’t think America is immune to the charms of a vicious extremist who has access to a microphone. Senator Joseph McCarthy held his reign of terror over our nation during the decade immediately following the “We” zenith of 1943. Blacklists, false accusations of conspiracy and irrational Witch Hunts have been the marks of every zenith of a “We” for the past 3,000 years. The 10 years on each side of a “We” zenith are always legalistic and intolerant.

Open-minded, thoughtful, considerate discussion is what America will need as we approach this next zenith of “We.” Sadly, that’s exactly what Germany and Russia needed at this same halfway point 80 years ago.

But that’s not who got their microphones.

To whom will we give ours?
Will it be men and women like FDR or will it be Joseph McCarthy?
Roy H. Williams

A word about writing:
Informative writing tells you what you did not know.
Persuasive writing offers you an attractive, alternative perspective.
Artistic writing communicates a mood, a feeling or an attitude.

An artist who does not occasionally fish the dark waters risks becoming a trite jingle writer or the composer of cheap greeting cards. My artistic treatise on suicide freaked a few people out last week. Sorry about that. But if dark shadows do not frighten you, I pulled a second one up from the depths.

From Wikipedia – In 1947, [just 4 years after the zenith of “We” -RHW]
the House Un-American Activities Committee held nine days of hearings into alleged communist propaganda and influence in the Hollywood motion picture industry. After conviction on contempt of Congress charges for refusal to answer some questions posed by committee members, the “Hollywood Ten” were blacklisted by the industry. Eventually, more than 300 artists—including directors, radio commentators, actors and particularly screenwriters—were boycotted by the studios. Some, like Charlie Chaplin, left the U.S. to find work. Others wrote under pseudonyms or the names of colleagues. Only about ten percent succeeded in rebuilding careers within the entertainment industry.