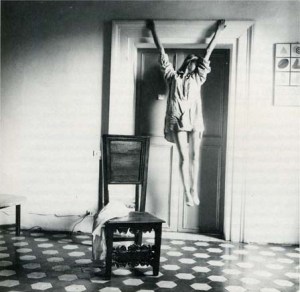 She jumped from the window of a building on New York’s East Side on January 19, 1981. Her face was erased by the fall.

I’m not sure what I was doing that day but I did not kill myself.

No one knew her name so her body remained unclaimed until she was reported missing. She was identified by her clothes.

Suicide troubles me. I get it but I don’t.

I think I’ve known more people who killed themselves than the average person. This, too, troubles me.

Francesca often denied the camera her face, turning away from it as though she didn’t want to be photographed. But Francesca was a photographer, the very photographer, in fact, who was taking her picture.

I think Francesca Woodman was hiding from herself. And one day she hid so very well that she never found herself again.

Francesca was a profoundly artistic photographer. Had she not hidden herself so completely she might have enjoyed a visit to 1071 Fifth Avenue. The photographs she made during the 9 years following her 13th birthday have become the feature attraction of the Guggenheim, one of the world’s most prestigious museums. I put a few of her photographs in the rabbit hole for you. (Just click the photo of Francesca hanging from the lintel of the door above the title of today’s Monday Morning Memo. Each click of a photo beyond that portal will take you one step deeper.)

Francesca Woodman was born when I was 5 days old. Steve was a couple of years older.

I remember Steve because he and I often prayed together when I was 22. One day he and his wife asked Pennie and me to have dinner in their home. On a different day, his wife asked Steve for a divorce. Steve moved out, as requested.

On a final day, Steve broke into his house while his wife and young son were out. He went into his son’s room. I remember that room. You know what happened next.

I don’t know why I’m telling you this.

Steve was a lineman for the telephone company.
He had a life and then he didn’t.

Maybe I’m telling you this because one of you is thinking of quitting early.

All I can say is this and it’s probably the wrong thing to say; decades of sadness and confusion are the legacy left by those who quit early, the bitter inheritance you give to those who created a place for you in their hearts.

Not everyone is showcased by the Guggenheim.