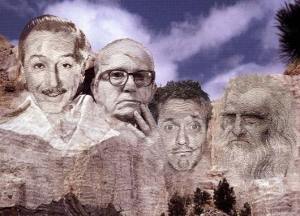 Guilt is about what you have done.

Shame is about who you are.

I’ve always been attracted to people who are guilty, but unashamed. Guilt without shame is audacity, a special kind of courage.  It’s what we admire in the little boy who shouted, “The king is naked! Right there in the middle of the street! Naked!”

Everyone was thinking it, but no one was willing to say it.

I’ll bet that kid was in trouble when he got home. His mom probably even used all three of his middle names, “Oscar Fingal O’Flahertie Wills Wilde, what were you thinking?”

“Well Mom, I was thinking the king was naked.”

“Oscar, what you did was unacceptable… inappropriate… inexcusable.”

The boy was guilty of speaking a socially unacceptable truth. His mother knew the danger of it. “Oscar, people are rarely thankful when you pull aside their veils of pretense to reveal their grand delusions.”

Oscar Wilde died 112 years ago but we still recall the piercing observations of his stiletto wit.

“The worst vice of a fanatic is his sincerity.”

“And he goes through life, his mouth open, and his mind closed.”

“He has no enemies, but is intensely disliked by his friends.”

“Women are never disarmed by compliments. Men always are. That is the difference between the sexes.”

“Men always want to be a woman’s first love. Women have a more subtle instinct: What they like is to be a man’s last romance.”

“Man is least himself when he talks in his own person. Give him a mask, and he will tell you the truth.”

If you are committed to speaking the truth, it will be your choice of tools that defines you.  Oscar Wilde was a playwright. He put his words, like a ventriloquist, into the mouths of actors on the stage. Ad writers, screenwriters and novelists differ only in their ventriloquist’s dummies, the masks they hide behind.

Dorothy Parker was just 7 when Oscar Wilde died but he left her his stiletto wit. Dorothy became a journalist. No dummy. No mask.

When a Broadway play was interrupted to announce the death of Calvin Coolidge, Dorothy leaned over and whispered to a friend, “How do they know?”

When reviewing The Autobiography of Margot Asquith for the Oct. 22, 1927 issue of The New Yorker, Dorothy wrote, “The affair between Margot Asquith and Margot Asquith will live as one of the prettiest love stories of all literature.”

In another review, she said, “This wasn’t just plain terrible, this was fancy terrible. This was terrible with raisins in it.”

Dorothy Parker had the audacity to speak the truth.
“All those writers who write about their childhood! Gentle God, if I wrote about mine you wouldn’t sit in the same room with me.” Not even the church was safe. “But as for helping me in the outside world, the convent taught me only that if you spit on a pencil, it will erase ink.”

In later years, she said, “I had been fed, in my youth, a lot of old wives’ tales about how men would instantly forsake a beautiful woman to flock around a brilliant one. It is but fair to say that, after getting out in the world, I have never seen this happen.”

The bright clarity of her observations earned her a place on the infamous Hollywood Blacklists of Senator Joseph McCarthy and the House Committee on Un-American Activities. But Dorothy was not dismayed. She said: “They sicken of the calm who know the storm.”

In other words, bring it on.

If it’s a crime to pull back the veil of public pretense and name the nakedness of kings, Dorothy was definitely guilty.

Dorothy Parker died 5 years before Ze Frank was born, but I recognize the flash of his blade; big ideas packed into few words, Oscar and Dorothy for the 21st centuy.

Ze showed us the power of the video blog when, in 2006, he committed to post a new show every day for a year. The Show with ZeFrank is the stuff of internet legend. March 18, 2007, was a desolate day for millions of fans worldwide. The 365 days had ended. No Show. Ze was gone, just as he said he would be.

When, a couple of weeks ago, Ze Frank announced he was going to do something new, a spontaneous party erupted around the world. There were fireworks, laughter and dancing in the streets. Our new Vice-Chancellor, Michele Miller, miraculously convinced Ze to share what he knows with us on September 13 at Wizard Academy.

You’ve heard me say that Leonardo da Vinci, Buckminster Fuller and Walt Disney would teach here if they were still alive. I know this because each of them was creatively disruptive, our brand of crazy. If the face of Ze Frank were carved alongside da Vinci, Fuller and Disney on Wizard Academy’s private Mount Rushmore, he would not look out of place.

I wouldn’t miss this event for anything. Neither should you.

I will say no more about it.

PS – Okay, I’ll say one last thing about it. Click the link that says “this event” just above my signature to see the inaugural video that Ze, now 40, has posted. He calls it An Invocation for Beginnings.