"Leap, and the Net Will Appear." – Gaelyn Foley 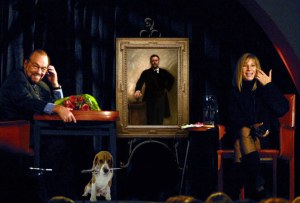 James Lipton asked Barbra Streisand the secret of her success. She responded by saying, “At the moment of commitment, the Universe conspires to assist you.” – September 8, 2003, while recording an episode of Inside the Actor’s Studiothat would air on March 21, 2004

Streisand was summarizing a quote usually attributed to Johann Wolfgang von Goethe (1749-1832,) the Shakespeare of Germany:

“Until one is committed, there is hesitancy, the chance to draw back. Concerning all acts of initiative and creation, there is one elementary truth, the ignorance of which kills countless ideas and splendid plans: that the moment one definitely commits oneself, then Providence moves too. All sorts of things occur to help one that would never otherwise have occurred. A whole stream of events issues from the decision, raising in one’s favor all manner of unforeseen incidents and meetings and material assistance, which no man could have dreamed would have come his way. Whatever you can do, or dream you can do, begin it. Boldness has genius, power, and magic in it. Begin it now.”

The medical term for this most American characteristic is hypomania. In a nutshell, hypomania is “the good kind of crazy,” an irrational optimism that never abandons its hold on the truth. (Mania is bad. Hypermania would be “beyond mania,” extremely bad, but Hypomania is an optimism that remains “below mania.”) Hence, the good kind of crazy; “There’s got to be a pony in here somewhere!” (Google that punchline if you don’t know the story. Or ask a few of your friends. One of them will know.)

Hypomania is (1.) an inherited bipolar disorder, (2.) the definitive characteristic of the American people and (3.) extremely common in successful entrepreneurs. Hypomania is considered to be the most common undiagnosed condition in our nation. Think about it. No one ever goes to a counselor, psychologist or psychiatrist to say, “I’m feeling GREAT, Doc! What’s wrong with me?”

Read the biography of any man or woman who left their fingerprints on the world and you’ll likely read the tale of a hypomaniac, someone who said, “I must attempt the ridiculous if I am to accomplish the impossible.” Ray Kroc, Mother Teresa, Teddy Roosevelt, Barbra Streisand, Steve Jobs, Florence Nightingale, Tom McDowall, Jane Pauley, Cornelius Vanderbilt, Ronald Reagan…)

Yes, it’s inherited. A few generations ago, tens of thousands of men and women boarded ships that would take them to America. These men and women had minimal skills, no money, no jobs, no relatives or friends waiting for their arrival. Yet somehow these people believed, “This is going to be AWESOME! We’ve got it made.”

The average American is a descendant of self-selected hypomaniacs. Consider the impact of a few generations of interbreeding and it’s no wonder that hypomania is the principal trait the world loves and hates about Americans. Make no mistake. Hypomania can easily cross the line into arrogance and self-delusion; Charlie Sheen, Ernest Hemingway and Robert Downey, Jr. were each fomally diagnosed with it.

Hypomania is a medical disorder, but one with an upside: It helps us “to dream the impossible dream, to fight the unbeatable foe, to bear with unbearable sorrow, to run where the brave dare not go…”

You can learn magical things from crazy people if they are “the good kind” of crazy. How to Make Awesome Sauce is a gathering of highly-accomplished entrepreneurs who have proven themselves in the marketplace in very BIG ways. David McInnis, Dean Rotbart and Jeffrey and Bryan Eisenberg are going to mentor “whosoever will” for 72 life-altering hours March 13-15 in the tower at Wizard Academy. Will you? Be there?

You can’t learn to ride a bicycle by reading a book or watching a video. There’s a big difference between “understanding” and “doing.” This is a “doing” class. These guys will say, “So what?” as they help you back onto your banged-up bike. Success comes only to those who are crazy enough to swing a leg over, peddle-peddle-peddle, fall down, get up, then swing that leg over and peddle-peddle-peddle again. At least 3 NEW businesses will exist and be making money by the end of the third day. One of them could be yours.

Do you have an idea for an online business? Would you like to launch it in less than 72 hours with the help of some of the biggest boys in the land?

Are you crazy enough to believe your idea can become reality?