Are Two Heads Really Better Than One? 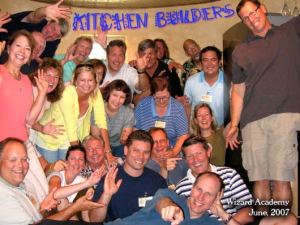 “Two heads are better than one,” is often quoted but horribly wrong.  Trust me, I know.

Anything with two heads is a monster.

“Nothing was ever created by two men. There are no good collaborations, whether in music, in art, in poetry, in mathematics, in philosophy. Once the miracle of creation has taken place, the group can build and extend it, but the group never invents anything. The preciousness lies in the lonely mind of a man.”
– John Steinbeck, East of Eden, Chap. 13, 1952

This is the point in the discussion where one could easily say, “Well, that’s your opinion and Steinbeck’s. But I happen to know that brainstorming as a team leads to better idea generation.”

But do you know that, really? Or is brainstorming just another sacred cultural myth?

Jonah Lehrer published a research article this week that eliminates the need for speculation and debate.

Alex Faikney Osborn was the “O” in the famous advertising agency B.B.D.O.  Alex was full of ideas. His first book, How to “Think Up”, was published in 1942, followed by Your Creative Power in 1948, Wake Up Your Mind in 1952, and then in 1953, Applied Imagination: Principles and Procedures of Creative Problem Solving.

In the opening paragraphs of Jonah Lehrer’s marvelous research into “Groupthink,” he writes,

“Osborn’s most celebrated idea was the one discussed in Chapter 33, ‘How to Organize a Squad to Create Ideas.’ When a group works together, he wrote, the members should engage in a ‘brainstorm.’ The book outlined the essential rules of a successful brainstorming session. The single most important of these, Osborn said, was the absence of criticism and negative feedback. Brainstorming was an immediate hit and Osborn became a popular business guru. The underlying assumption of brainstorming is that if people are scared of saying the wrong thing, they’ll end up saying nothing at all. Typically, participants leave a brainstorming session proud of their contribution. The whiteboard has been filled with free associations. At such moments, brainstorming can seem like an ideal mental technique, a feel-good way to boost productivity. But there is one overwhelming problem with brainstorming. It doesn’t work. The first empirical test of Osborn’s brainstorming technique was performed at Yale University, in 1958. The results were a sobering refutation of Osborn. Although the findings did nothing to dent brainstorming’s popularity, numerous follow-up studies have come to the same conclusion.”

Interesting, isn’t it? Sixty years of scientifically controlled experiments, studies and tests have proven brainstorming to be significantly less effective than individual effort but the brainstorming myth just won’t go away.

Here’s the real kicker: discussion and debate – the very two things prohibited in a  ‘brainstorming’ session – have been repeatedly proven to bring out the best in us.

And now I must pause to do my Happy Dance.

I’m happy because Jonah Lehrer describes, in the second half of his research article, what has been proven time and again to be the ultimate environment for true creative breakthrough, “a space with an almost uncanny ability to extract the best from people… a magical incubator.” He then gives us a clear description of the kitchen and courtyard of Engelbrecht House, the student mansion on the campus of Wizard Academy.

Many of you reading this Monday Morning Memo will recall my greeting during the opening session on your first day of class at Wizard Academy. “Each of you came here to be enlarged by your instructor. You will, I promise, not be disappointed. But at the end of these days and nights together, as you prepare to go back home, you will realize that the most precious gift we gave you was the gift of each other.”

Do you want the recipe for magic? Real magic? World-changing, life-altering magic? Here it is:

1. Gather about a dozen or so really curious people.

2. Let them share meals together, have coffee together and drink wine together between multiple sessions of mind-stretching stimulation.

3. The magic will emerge during the times of casual discussion, relaxation and recovery as these people bring out the best in each other with questions and stories and the sharing of personal observations.

Discussion and debate, sharing and defending your viewpoint with an open mind, considering and processing the input of other smart people in a fun and safe environment. Welcome to Wizard Academy.

I felt certain we were on the right track.

Thank you, Jonah Lehrer, for proving it.

And now I’m going to do my Happy Dance again.