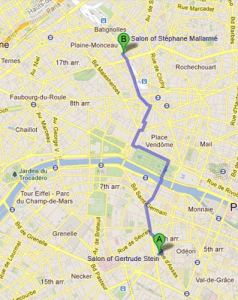 1845: This is the year Johnny “Appleseed” Chapman will plant his final apple tree. Mark Twain is 10 years old, living the boyhood that will bring us Tom Sawyer. Florida will be added to the U.S. this year, raising the total number of states to 27. We think of life as being simpler, more idyllic back then, don’t we?

The American Revolution was more recent to them than World War II is to us today. Memories of colonial times were only just beginning to fade. But Thoreau felt compelled to take a sabbatical in the woods near Concord, Massachusetts, saying, “The mass of men lead lives of quiet desperation.”

Stéphane Mallarmé was 3 years old and living in Paris in 1845, much too young and too far away to extend a hand to Thoreau. But in just a few more years he’ll bring a generation of world-changers together on Tuesday nights at 89 Rue de Rome.

Gertrude Stein never met Mallarmé though their houses were only 3 miles apart. Stein arrived in Paris in 1903, 5 years after Mallarmé died. Stein’s living room is where Pablo Picasso, Ernest Hemingway, Henri Matisse, F. Scott Fitzgerald, Salvador Dali and Man Ray banged ideas together while Josephine Baker danced to the music of Cole Porter who played the piano and sang. None of them was yet famous.

Prior to 1953, America was too uptight to embrace outside-the-box thinkers so Paris was the haven for renegades. The living rooms of Mallarmé and Stein were like cabins in the woods. But when several Henry Davids arrive at a cabin simultaneously, the dust in the air begins to sparkle as the place becomes an island of pirates. Tinker Bell can be seen if you look quickly enough. Peter Pan is learning to fly.

The salons of Stein and Mallarmé brought together the great minds of their day and tumbled them like clothes in a dryer, influencing, stimulating, inspiring one another to new heights above the accepted norm.

Stein and Mallarmé were unimportant writers who surrounded themselves with the shapers of fashion, the inventors of tomorrow, the makers of the future.

I strongly identify with Stein and Mallarmé.

How about you? Will your need to be “normal” condemn you to a life of screaming mediocrity? You’re familiar with the phrase, “The mass of men lead lives of quiet desperation…” but the truly frightening part is the thought that follows, “and go to their graves with their songs still in them.”

Thoreau went to Walden Pond because Wizard Academy was not yet built.

This bizarre little business school in Austin, Texas, is barely a dozen years old but its alumni and friends include an astounding array of scientists and musicians, journalists and authors, businesspeople and government officials. Tony Hsieh of Zappos recently sent us his endorsement of Pendulum, the book we’ll release this spring. Two of our alumni will be elected to congress in November.

Don’t go to your grave with your song still in you. Come and tumble topsy-turvy in the dryer with people who will make you sparkle and shine. It’s time you learned to fly.

The day-to-day can wait. Don’t allow the merely urgent to displace the truly important.

PS – The big fish are no longer eating the little fish. The fast fish are eating the slow. To succeed today, you must think quickly, act quickly. If you will succeed, you must know How to Make Awesome Sauce.