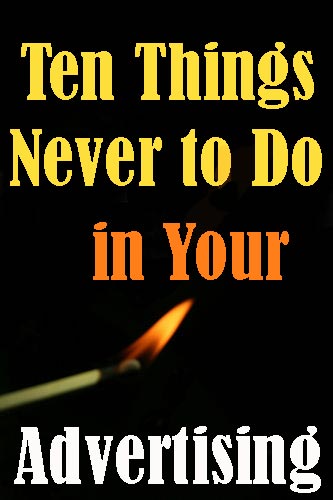 1. Never promise everything you plan to deliver.
Leave something to become the delight factor. That unexpected, extra bit you deliver “because we love you” will go a long way toward helping the customer forgive and forget any areas where you may have fallen short. Great ads are written in three steps: (1.) How to End. What will be the Last Mental Image your ad presents to your customer? Begin with the end in mind. (2.) Where to Begin. A clear but interesting angle of approach will gain the customer’s attention. (3.) What to Leave Out. Surprise is the foundation of delight. What will you intentionally leave out of your ad so that you can deliver a delightful surprise? What will you leave out so that the imagination of the customer is engaged?

2. Never begin a sentence with the word, “Imagine…”
If you’re planning to take your customer on a journey of imagination, plunge them into it. “The wheels of your airplane touch down, but not in the city you were promised…” “You must now choose between two good things…” “If you had more enemies like these, you wouldn’t need friends…”

3. Never include your name in an ad more often than it would be spoken in normal conversation.
Cramming your name where it doesn’t belong is AdSpeak. Back when Americans encountered one thirtieth as many ads each day, the rule was to repeat the name of the advertiser as often as possible. Do this today and your ads will sound like they were written in the 1940s.

4. Never conjure an unpleasant mental image.
Fear and disgust work face-to-face, but they often backfire when used in mass media. Conjure these unpleasant emotions in the minds of the masses and you’ll leave your listeners with a vaguely bad feeling attached to your name. They’ll want to avoid you, but they won’t be able to recall exactly why.

5. Never respond to a challenge from a competitor smaller than you. Drawing attention to a smaller competitor makes them larger in the eyes of the public. Conversely, if someone bigger than you is foolish enough to shine their spotlight on you, dance in it.

6. Never claim to have exceptional service.
Most people won’t believe you. And those who do believe you will expect more from your staff than they can possibly deliver. It’s a lose/lose proposition. Rather than promise exceptional service in your ads, tell the public something objective, factual and verifiable that causes them to say, “Wow. Those people really serve their customers.” Never praise yourself. Do things that make the customer praise you.

7. Never mention the recession.
I understand how tempting it is to say, “In order to help you combat the recession we’re offering…” But all that really does is remind the customer that now is not a good time to be spending money.

8. Never make a claim you don’t immediately support with evidence.
Unsubstantiated claims are the worst form of AdSpeak. Give the customer facts, details and objective proof if you want to win their confidence. Specifics are more believable than generalities.

9. Never use humor that doesn’t reinforce the principal point of your ad.
Here’s the litmus test: If remembering the humor forces you to recall the message of the ad, the humor is motivated. Good job. But if recalling the humor doesn’t put you in memory of the ad’s main point, the humor is unmotivated and will make your ad less effective. Sure, people will like the ad. They just won’t buy what you’re selling.

10. Never say things in the usual way.
From billboards to storefronts to packaging to messages on T-shirts, ads whisper and wheedle and cajole and shout to win our attention. A 1978 Yankelovich study reported that the average American was confronted with more than 2,000 advertising messages per day. But that was 30 years ago. When Yankelovich revisited the study in 2008, the number had jumped to more than 5,000 messages per day. The mundane, the predictable and the usual are filtered and rejected from our consciousness. Win the customer’s attention with words and phrases that are new, surprising and different.

We’ll teach you how.