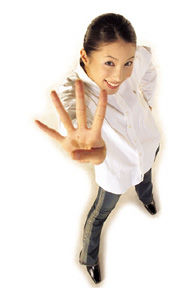 Like water, Path Dominance silently follows the path of least resistance, going to where there is no competition and then winning by default.

Path Dominance allows its proponents to sell inferior products at exorbitant prices. And it can lift these products to success in spite of horrible advertising. Path Dominance isn’t damaged by lazy salespeople, flawed warranties or dirty floors. It confuses the heck out of anyone who believes “the good guys always win.”

Is Budweiser the best beer in America?

Yet it remains number one.

Was DOS ever a good operating system?

Yet it made Bill Gates a billionaire.

Was VHS technology ever half as good as Betamax?

Yet it became the standard format of VCRs worldwide.

Would you pay top dollar for a meal that you knew would be lousy?

You do it every time you buy a hotdog or nachos in a sports arena.

Path Dominance is built upon distribution and convenience.

Budweiser became the King of Beers by purchasing all the eye-level shelf space from America’s retailers. And their contracts with restaurant chains ensure that Bud will always be on tap. With path dominance like that, Budweiser would’ve succeeded even if they’d spent their advertising dollars on talking frogs.

Bill Gates knew that Apple’s operating system was superior to his own, but he won the game through Path Dominance. When Apple refused to license their operating system to other computer manufacturers, Bill said, “Hey you wanna build computers? Here, use my operating system. It’s called DOS.”

The original name was QDOS, standing for “Quick and Dirty Operating System.” No, I’m not making this up.

Likewise, back when video rental stores had a VHS section and a Betamax section, Sony refused to license their fabulous Betamax format to the other makers of VCRs, so JVC said, “Hey you wanna make VCRs? Here, use our format. It’s called VHS.”

Then, when you and I went to buy our VCRs, we were able to choose from dozens of units using the VHS format and only 2 or 3 models using Betamax. And now there’s no Betamax section anymore. Path Dominance.

If the Heat and Air Conditioning installers in your city all stocked the same brand of air conditioner in their warehouses and made all other brands “special order,” is there any doubt in your mind the brand they stocked would quickly become number one?

So please, whatever you do, don’t assume that all winners deserve the rose garland around their necks. When the competitive environment allows for Path Dominance to emerge, the Winner’s Circle will usually be occupied by a company with a lousy product, untrained people and terrible advertising.

Path Dominance is like an ocean tide; it can rise and flow above every obstacle.

Ignore it and it will drown you.