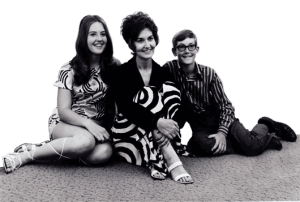 Alfred taught me never to be ruled by fear.

I met Alfred when he took the first photograph of my family that didn’t include my father. Mom wanted a family photo, I think, to prove we were still a family.

Alfred was married to Ella Mae, a friend of my mother’s from work.

Ella Mae was a pixie with an elfin face, slightly built and spindly. Dark hair and eyes adorned exotic features that might have been Persian, Native American or Jewish. I often heard “Ella Mae” at dinnertime as Mom recounted her day.

Alfred was considerably older than Ella Mae but she didn’t marry him for his money. They lived happily together in a plain, frame house on a street of plain houses, no rock or brick or sidewalks or trees. These were the homes with short eaves: low-pitched roofs overhung exterior walls by only 4 and ½ inches, houses built during the Big One when America was frugal because we had a Hitler to kill. Lumber and shingles cost money.

But inside, the house was different. Artistic black and white photographs decorated the walls, using light and shadow and angles of view like no photos I had ever seen. Symphonies thundered and rumbled and trilled the air with emotion unutterable in words.

“It doesn’t sound like him at all,” I said. “But then the only song of his I’ve ever heard is ‘Please Release Me, Let Me Go.’”

Alfred turned and scowled as he spoke to the wall with barely suppressed rage,

“That little bastard is an impostor! Engelbert Humperdinck is not even his real name. He’s just a thief who stole the name of the composer who wrote this song 70 years ago.”

Just then, Ella Mae passed through the room and Alfred relaxed visibly as his eyes followed her.

I met Alfred only that once but his mark will remain on me forever. All the men I had ever known were into guns, sports and horses. Guns disgusted me, sports seemed pointless and horses bored me to the edge of stupor. I knew, even as a little boy, that these men were not my people.

Alfred showed me that a man could hear music instead of gunfire, throw himself into art instead of sport and be carried away by literature instead of horses.

Until that day, I had never known I had these options. Alfred opened my eyes.

A noise in the other room slapped Alfred awake one night. Terrified, he focused his attention on the approaching sound as he reached for his pistol. The last thing that intruder ever saw was the muzzle-flash of Alfred’s handgun.

Alfred stumbled to the light switch and saw that he had killed Ella Mae.

Alfred taught me never to be ruled by fear.