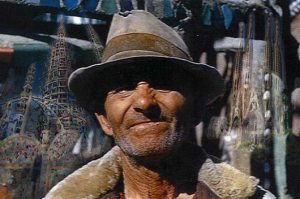 He seems to have been crazy.

Seems to have been.

But what he left behind was beautiful.

He worked on it alone from 1921 to 1954, then signed the deed over to a neighbor and disappeared.

The Beatles put his face next to Bob Dylan’s on the album cover of  Sgt. Pepper’s Lonely Hearts Club Band in 1967.

The surreal structure Sam left behind was declared a National Historic Monument in 1990.

If Sam could illustrate what he saw, he would have been crazy like Dr. Seuss. But his paints were not liquid. They were broken bits of glazed pottery and colored glass embedded in concrete over wire-covered steel.

In Sam’s fingers a shattered 7-Up bottle became a splash of sparkling green in the sky above Los Angeles. Milk of Magnesia bottles offered Sam the riches of cobalt blue. The sea placed at his feet the whitewashed shells of underwater creatures and the dumpster of a pottery factory gave him the Sunflowers yellow of Vincent Van Gogh and the red blood of an Italian saint.

Spain’s Antoni Gaudi began the Sagrada Familia in Barcelona in 1883.

He finished and vanished before I was born.

Sam made bas relief murals in colored cement by pressing his tools into the mix when it was still young and impressionable.

He made an impression on me as well and I am no longer young.

Three weeks ago I asked Paul Sherman for the money to build a winding sidewalk from Wizard Academy’s tower down to where the chapel path meets the Garden of Joy. Paul granted us the cash because Paul is a generous man who appreciates what he has learned during his visits to the Academy and the difference this knowledge has made in his business.

And now I’m asking you to help build an archway, a portal on Paul’s sidewalk, in the manner of Sam Rodia. This archway, this portal to adventure, will be built by Pennie and me from the objects you send us along with the fifty dollars or more you donate to Wizard Academy.

Sam’s style and method of building from found objects has been called naïve art, outsider art, folk art and junkitecture.

I call it enchanting, inspiring and crazy.

Gordon Rawlinson: Thank You
for the 35 bottles of expertly-selected red wine you sent in honor of Pennie’s and my 35th wedding anniversary. I only just found out that you never received my thanks by video. (I thought I would be clever and mention it to all the students in my monthly webcast. Knowing that dozens of your employees participate in these webcasts, I mistakenly assumed one or ten of them would have mentioned it to you.) My bad. I remember saying that I was profoundly impressed with the sensitivity of whoever made the selections. I gathered all the fingers on my right hand to my right thumb, raised the group to my lips and kissed them in the manner of Europeans as a salute. (As instructed, all the wine went to my house to be enjoyed by Pennie and I alone.) You’re a true friend. Come visit! – RHW